As if not unpopular enough, the Biden administration has announced plans to double down on the unwinnable drug war. This time, the alphabet boys are coming for the vapes.

“The U.S. Food and Drug Administration issued marketing denial orders (MDOs) to JUUL Labs Inc. for all of their products currently marketed in the United States. As a result, the company must stop selling and distributing these products. In addition, those currently on the U.S. market must be removed, or risk enforcement action.”

At the same time, the Biden administration is also proposing a rule to cap the maximum allowable nicotine levels in cigarettes.

“The FDA will help significantly reduce youth initiation, increase the chances of smoking cessation among current smokers, and address health disparities experienced by communities of color, low-income populations, and LGBTQ+ individuals, all of whom are far more likely to use these tobacco products.”

No flavors, no mint, no good hard tobacco kick – no fun for you. If you’re lucky, you’ll get diluted, gray government nicotine – or, else, nothing at all.

The alleged motivations of the FDA/Biden administration bureaucrats are highly suspect. They’re on the job protecting your teenager from strawberry-flavored nicotine products. But, simultaneously, they’re more than willing to inject 6-month-olds with unnecessary and experimental gene therapies that don’t protect them from a virus that posed very little risk to them in the first place.

They’ll also shovel Ritalin and Adderall (an amphetamine salt which is, for all intents and purposes, essentially legal meth) down your kid’s throat so they’ll sit still in their public school library during drag queen story hour.

But they’ll protect them from the e-cigarettes that are already illegal to sell to minors.

Even if an undeserved olive branch were extended, and the government’s motivations were assumed to be pure as the driven snow, the infantilization of the public is an insult to individual dignity.

If liberty means anything, it’s that adults are at liberty to take risks with their own health, safety, and even their lives. Protecting people from themselves – as a mother removes a AAA battery from her baby’s mouth – is not within the government’s purview.

Moreover, even if the government’s pure intentions and right to assume moral authority over what adults are allowed to ingest, what does the historical record say about the government’s ability to regulate banned substances?

Drug arrests are the #1 driver of mass incarceration in the Land of the Free, which is itself the #1 incarcerator in the world both in raw numbers and on a per capita basis.

But, drug warriors will then argue, mass incarceration – which costs tens of thousands of dollars per prisoner per year, incubates a criminal subculture, and robs non-violent drug users of their future – might be a steep cost, but maybe it’s worthwhile if it produces less drug use. Right? 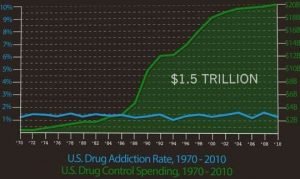 One of those lines is not like the other. Trillions of dollars later, drug addiction rates are roughly the same as 40 years ago.

In addition to failing to curb the appetite for the banned substance, prohibition also inevitably births new opportunities for entrepreneurs to operate outside of law in underground black markets:

“Though the advocates of prohibition had argued that banning sales of alcohol would reduce criminal activity, it in fact directly contributed to the rise of organized crime. After the Eighteenth Amendment went into force, bootlegging, or the illegal distillation and sale of alcoholic beverages, became widespread.”

Supply and demand always wins out. When an economic sector is pushed underground, all it produces, without exception, is more violence, more organized crime, dangerous/substandard products, and more destroyed futures.

America can’t win any other war despite massive resources. Why would the drug war be any different?

The US government spent at least $2.3 trillion (of accounted money – the true figure is probably higher) on the Afghanistan war, only to abandon the project twenty years later, leaving behind a sea of sophisticated military equipment in the hands of the Taliban.

The US government spent another $2+ trillion in Iraq (based on Deep State lies), only to abandon that project as well, destabilizing the entire country, plunging it into bloody civil war, and handing over a huge swathe of territory to a violent theocratic terror state.

Which federal employee was ever held accountable for their monumental failure – despite obscene funding? Dick Cheney, Bush, and the neoconservative war criminals responsible for the Iraq War walk free. The foremost drug war proponent in the Senate, Joe Biden, was awarded with the presidency.

If the drug war were a private enterprise, investors and other stakeholders would have demanded proof of some modicum of progress. Without proof of efficacy, they would never continue dumping trillions into the project.

But in America, in 2022, the American public (the theoretical stakeholder and funder) has no say in public policy. This is not rhetorical hyperbole but rather documented statistical reality.

It doesn’t matter how ineffective the government intervention is – whether the stated aim is to depose a foreign dictator or control domestic drug consumption.

In large part, the looting of the public treasury is the point. Excess, escalating funding as a reward for continued failure by the executors of the drug war is the feature, not the bug.

The inevitable result of the tobacco ban will be more of the same: your tax money will be squandered in a failed attempt to dissuade you from accessing desired goods by restricting your liberties – all in the service of ulterior motives.

What the ban is guaranteed to achieve is a more self-perpetuating bureaucracy that serves no one’s interests but its own.